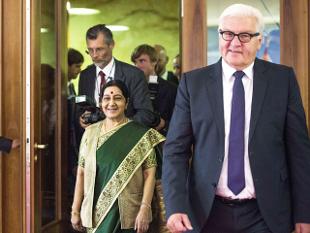 BERLIN: India has raised with Germany problems like residency status, renewal of visa and accommodation faced by Indian students in the country as both sides discussed new initiatives to ramp up cooperation in the area of education.

This was conveyed by External Affairs Minister Sushma Swaraj to German Education Minister Johanna Wanka when they met here yesterday.

During the meeting, Swaraj apprised Wanka about difficulties being faced by some of the Indian students in pursuin ..

The number of Indian students in Germany has gone up significantly in the last few years.

Both sides also decided to promote exchange of students as well collaboration between educational institutions of the two countries.

Wanka told Swaraj that Germany was planning to set up an international centre for advance studies in humanitie ..